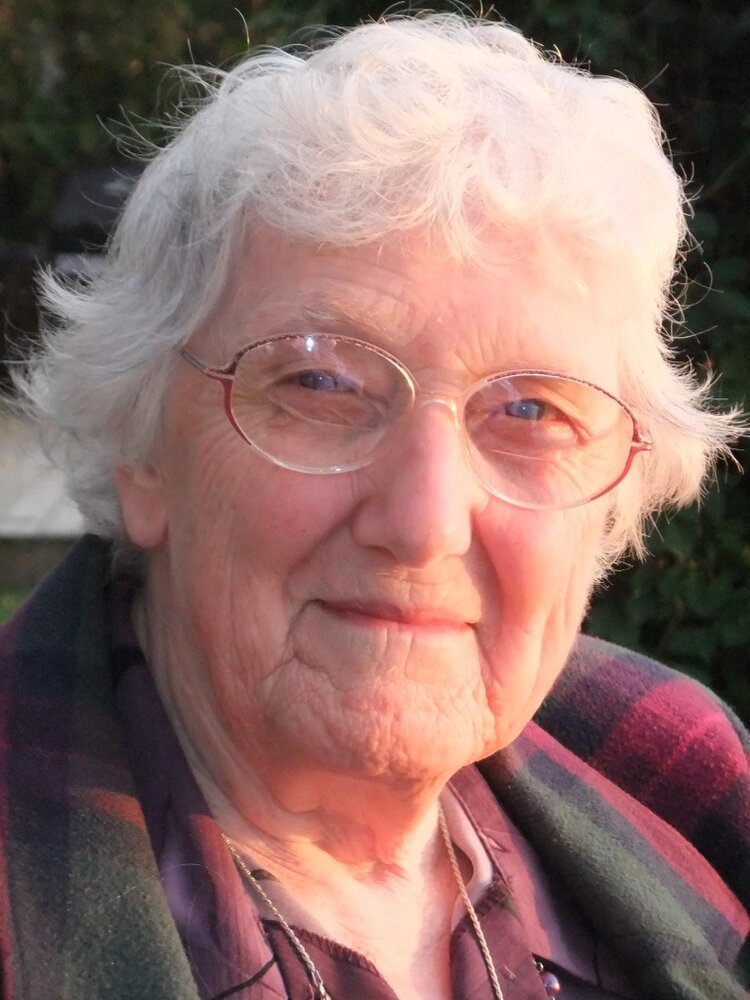 At Alexandra Marine and General Hospital in Goderich, June Marie Robinson passed away peacefully on October 18th, 2022, surrounded by her family. She was born on June 14th, 1927 to Gershom Nixon Johnston (1894-1973) and Ella Maude Elliott (1892-1985). She moved to the Robinson family farmhouse in 1946 after her marriage to David Edward “Ted” (1921-1999), and lived there until her death. Predeceased by her husband of 52 years, siblings William, Elliott (Mary), Donelda (Stewart Smith), Ariel (Charles Wood), Kenneth (Donna), Jim (Idella), and Janet, and her siblings-in-law Jean (Herbert Dainty), Gordon (Lavina), Doug Williams, and Clifford Simpson. Devoted mother of James (Donna Brown), William (Susanne Perrin), Judith (Norman Stoner), and Janice (Michael Clarke). Beloved grandmother to Patricia, Heather, Karen (David), Jennifer (Edgar), Iain (Elaine), Catherine (Kevin), Kyle, Christopher (Morgan), Katelyn, Rebekah, and William, and great-grandmother (“GG”) to Caleb, Wesley, Edward, Laila, Blake, Clara, Dillon, Noah, Harlow, Ethan and baby Stoner. She is survived by her siblings Lois McMichael, Alice (Clarence Ritchie), and Jack, and sister-in-law Irene Simpson. She will be lovingly remembered by her children, grandchildren, siblings and many nieces and nephews who have fond memories of holidays at the farm with Aunt June.

Loved wife, mother, sister, aunt, grandmother and community member. June dedicated her life to the service of others. She was an active participant in the Donnybrook UCW and the Auburn Women’s Institute, as well as a leader of 4H for over 30 years. June was an avid supporter of any causes her family worked on; for example she participated in the Huron Hospice annual “Hike for Hospice” fundraiser every year, and was frequently the event’s top fundraiser. It’s no wonder she received an Ontario Trillium Award for her volunteer work. Her love of genealogy led her to co-write the West Wawanosh history book published in 1996. But ultimately it was her love of family that grounded her, and encouraged her travels across Canada, Australia, China and Europe. She was a compendium of knowledge, always ready to help remove a stain, or perfect a recipe, and her gardening abilities were second to none. She will be greatly missed by everyone who knew her.

The family will receive friends and neighbours at the Robinson home farm (38275 Glen’s Hill Road, Auburn ON) on Monday October 24 from 7-9pm. Visitation will also be held at the McBurney Funeral Home, 35 Patrick Street West, in Wingham on Tuesday October 25 from 11:00am until the funeral service at 1:00pm. Interment will take place at Wingham Cemetery. The funeral will be live-streamed and a link is available at the top of the page. You may join us for the live-stream or watch the funeral at a later time.

In lieu of flowers, memorial donations to Huron Hospice (https://www.huronhospice.ca)  or Alexandra Marine and General Hospital (Goderich) or your charity of choice would be appreciated.

Online condolences can be made at www.mcburneyfuneralhome.com.

Share Your Memory of
June
Upload Your Memory View All Memories
Be the first to upload a memory!
Share A Memory
Send Flowers