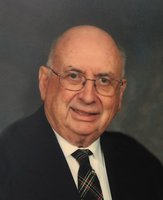 At Wingham & District Hospital on Wednesday, August 21, 2019, Dr. James Stanley Hall formerly of Wingham and Port Colborne at the age of 89.

Dad graduated from University of Toronto Medical School and went on to have a family practice in Port Colborne for 45 years. He was an honorary lifetime Lion’s Club member who served for 60 years within the club. Dad had a great love of music and enjoyed playing the piano and organ. He will be missed by everyone who knew him.

A memorial service will take place at the Wingham United Church on Thursday, August 29th, 2019 at 11:00 a.m. followed by a private family interment and a reception and visitation to follow at the church beginning at 1:00 p.m.

Memorial donations to the Wingham United Church, Lions Foundation of Canada Dog Guides or a charity of choice would be appreciated as expressions of sympathy.